Two young women from Wales have made history by becoming the youngest team to complete the Royal Western Yacht Club Round Britain and Ireland race – one of the hardest sailing races in Northern Europe.
Yacht Racing 27 Jun 22 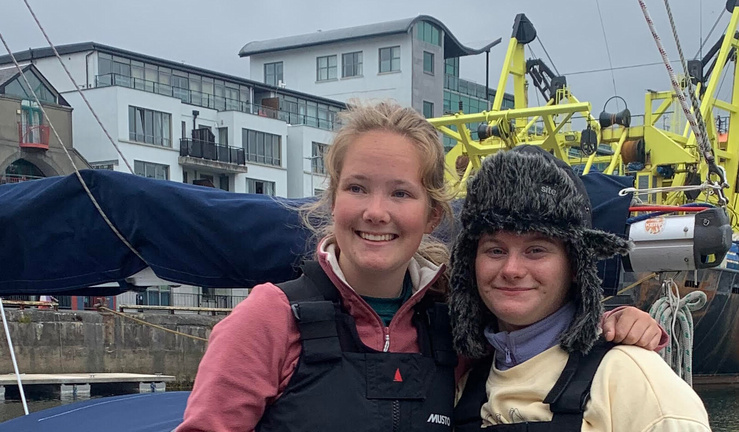 Lou Boorman from Pembrokeshire and Elin Jones from Wrexham spent a gruelling 22 days and more than 2000 nautical miles at sea aboard White Knight, a Contessa-32.
At age 20, Lou has also become the youngest skipper in the race’s 56-year history, whilst 19-year-old Elin is the youngest ever female competitor.

They crossed the finish line in Plymouth at 10:45pm on Sunday 26 May, and were given a warm welcome (including kebabs and champagne!) by family, friends, fellow competitors and members of the Royal Western Yacht Club.

Lou said: “It’s been an extraordinary experience that’s really tested my navigational skills and seamanship as well as nearly broken me mentally and physically.

“The lack of sleep coupled with extreme conditions, hunger and stress were enough to make me want to quit. Before we reached Lerwick when we were surviving the storm, I told myself I’d never step foot on that boat again. Luckily no sailor meets my stubbornness to persevere quite like my brilliant 1st Mate, Elin!”

Elin added: “We really couldn’t have done this without all the incredible support and encouragement we’ve received – so thank you to our family, friends, the other competitors, race organisers, and all the people we’d never met before around Britain and Ireland who helped us along the way.

“I’m really honoured that Lou asked me to do this with her, and I wouldn’t have wanted to do it with anyone else. It’s been really hard, but we’ve had a fantastic time together and it was so worth it when we finally crossed that finish line.”

The race, which is held every four years, began in Plymouth on 28 May 2022. The route includes three mandatory 48-hour stopovers - Galway in the Republic of Ireland, Lerwick in Scotland’s Shetland Isles, and Blyth in Northumberland, before embarking on the final leg back to Plymouth.

It wasn’t all plain sailing for White Knight, as just 12 hours into the first leg from Plymouth to Galway they lost battery power to all the navigation and communications instruments. Lou navigated the remainder of the 6-day leg using traditional paper navigation and Elin’s grandad’s old handheld GPS.

On the leg from Galway and Lerwick, they rode the front of tropical storm Alex for 4 days in near gale force winds between St Kilda and Muckle Flugga. Arriving in Lerwick they discovered they had won that leg on corrected time. Damage to sails and rigging were repaired with support of members of Lerwick Boating Club and other competitors.
The Lerwick to Blyth leg saw very light winds, and White Knight continued to have battery problems. These were fixed in Blyth with the help of members of The Royal Northumbrian Yacht Club and a marine engineer.

The final leg from Blyth to Plymouth also started with very light winds all down the east coast and as far as the Isle of White, before a patch of stormy weather tore the vital genoa halyard (rope that holds the sail up) on their last overnight stretch.

Lou and Elin were racing in memory of three of their grandparents who had Alzheimer’s – and have so far raised more than £1600. To donate to their appeal, visit https://www.justgiving.com/fundraising/LouandElinRoundBritainandIreland