Cody Sailing Club has re-vamped its dinghy fleet, helping female sailors to get out on the water, acquire new skills and develop confidence.
28 May 21 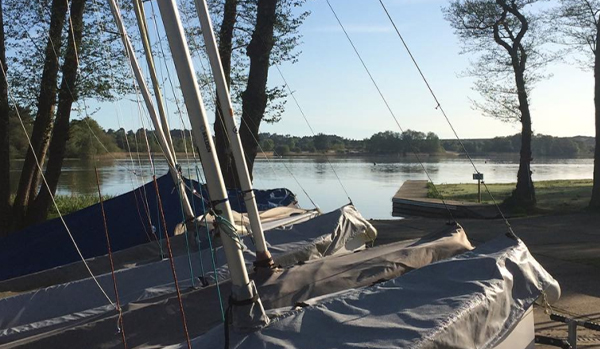 Cody Sailing Club organises affordable coastal sailing cruises and sailing-themed camping trips for its members, in a friendly and supportive group environment. Although the club doesn’t have any premises or a club house as such, it operates from its two locations at Frensham Pond Sailing Club in Surrey (where it has a lodger unit) and Southampton Sailing Club in Hampshire.

The club currently runs activities and keeps its club boats at both locations. For many years the club’s Dinghy Fleet comprised of three Comet Trios. However, in recent years the club’s ladies have been asking if the club could invest in some smaller lighter dinghies in the club fleet as they found the Comet Trios, at 15ft and 145Kgs, just a bit too heavy and large to move about and rig as a crew of two ladies on their own.

With the club finances in healthy shape in 2019, the Committee discussed ideas as to which type of smaller dinghy to buy on several occasions, but it was the advent of the COVID lockdown and a chance opportunity that catalysed the change.

As Rob Baldock, Cody Sailing Club Commodore explains: “A member of Frensham Pond Sailing Club had a Comet Versa which they were looking to sell and trade up to a larger dinghy. When we heard about this we approached them to see if they would be amenable to doing a deal for one of our Comet Trios, for their Comet Versa, which at 13 ft and 95Kg was significantly more manageable by two ladies on their own that a Comet Trio.”

The Club’s Vice Commodore, who is in charge of managing the dinghy fleet, then swung into action. He made one of the club’s Comet Trios available for inspection by the FPSC Versa owner, and he also inspected the Versa to ensure its condition. In the end the two agreed that a straight swap was a good deal to be done and this was duly agreed by the Committee, with the FPSC member becoming the owner of one of the club Comet Trios and the club becoming the owner of a Comet Versa in good condition.

At about the same time the Committee agreed that adding a single hander to the dinghy fleet would be a good idea. As under COVID conditions this meant that members could still sail without needing to find crew from other households. Having made this decision, the Vice Commodore was then also able to find and purchase a Laser in good condition, which is now also another dinghy in the fleet which the females in the club are better able to use, rather than the heavy bulky Comet Trios.

Rob adds: “The net result of our Committee and Vice Commodore’s decision making and activity over the early COVID Lockdown period has changed the clubs fleet from a homogeneous fleet of three Comet Trios, to now having two Comet Trios, a Comet Versa and a Laser.”

“This has made it much easier for the ladies in the club to get out on the water, either as a paired crew in the Comet Versa or as a single hander in the Laser. This has also increased the sailing done by ladies on their own, and their confidence to be able to go for a sail on their own immeasurably.”

The best example of this is the recent achievement by two of the club’s female members in gaining their RYA Seamanship qualification at Southampton Water Activity Centre using the clubs own Comet Versa for this course. This is a great achievement for the two ladies. The re-vamped dinghy fleet gave them the confidence to apply for this course and pass it off their own initiative without the need for any other assistance from the club other than the permission from the Committee for them to use the Club Versa for the course.

Rob concludes: “By taking an open mind to changing our dinghy fleet to types more suitable for ladies to handle, and by taking a fortunate opportunity when it presented itself, we have made the clubs dinghy fleet much more usable and accessible to the ladies in the club.”