Flushing Sailing Club celebrates its centenary with a new clubhouse 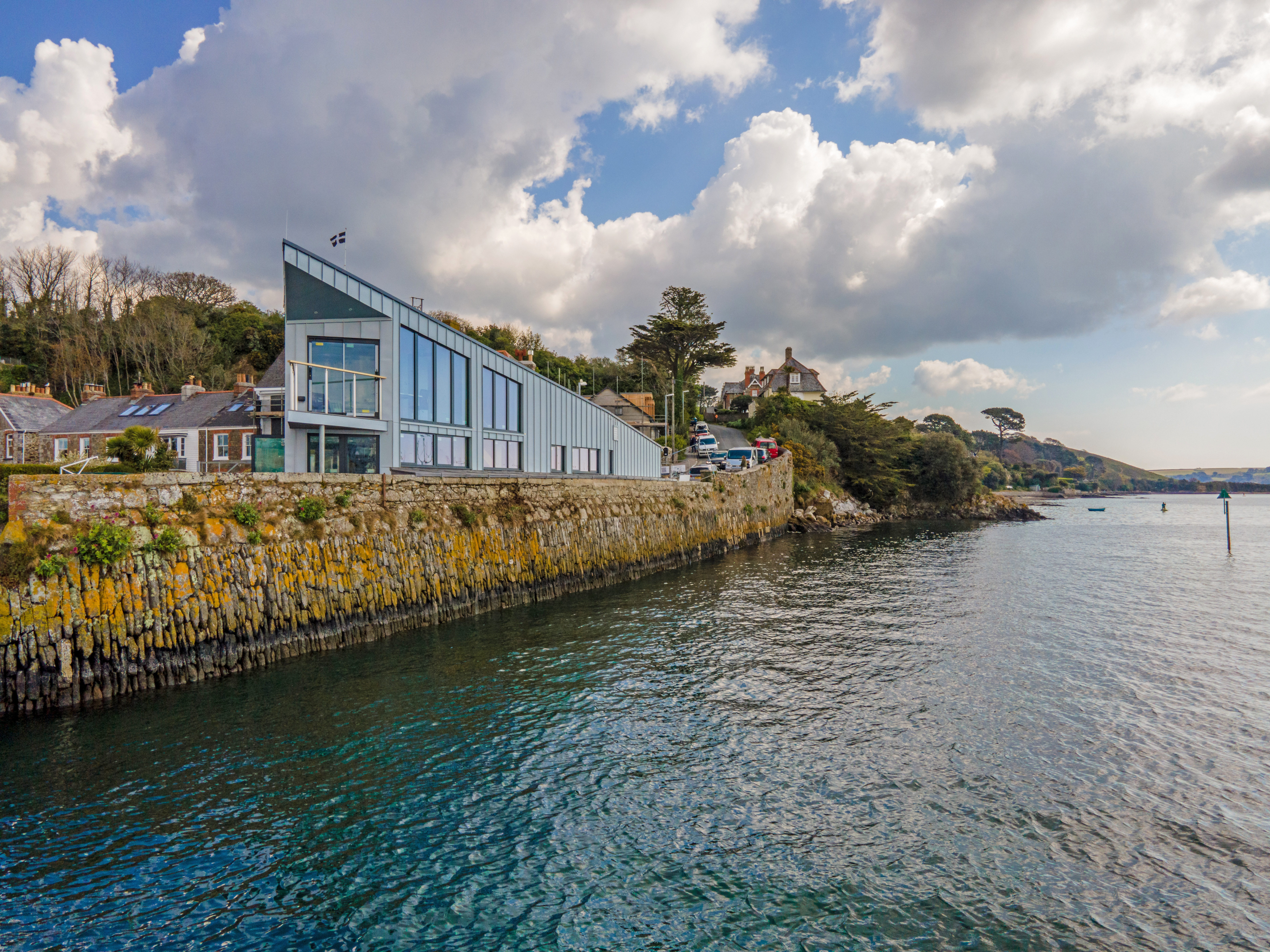 Flushing Sailing Club’s old clubhouse, built in 1959, was based on the structural design for municipal toilets in Torquay! Unlike the Torquay toilets, which were demolished 30 years ago, the clubhouse kept on going, until, about seven years ago, the roof started leaking.

FSC is an entirely voluntary yacht and keelboat racing club, as Trustee and Project Manager Dave Owens explains: “We have a lot of quite small boats as well as some very large pieces of metalwork whose owners want to race with us! We cater for a wide range of abilities and sailing performance and provide racing for everything from Falmouth working boats and 28ft racing catamarans down to Flying 15s and other small keelboats. We desperately needed a new clubhouse that met the needs of our members, with a larger club room and full disabled access, but we had significant hurdles to overcome and it’s taken a seven-year programme to achieve.”

The club is located on Flushing’s New Quay, which is a listed structure that lies within a conservation area, as well as the Cornwall Area of Outstanding Natural Beauty, and also the Fal and Helford Estuaries Special Area of Conservation. Fortunately, four members were able to form a highly experienced building group with the key skills to deal with the significant planning work associated with such a sensitive build – Peter Harvey, an ex-partner at PWC and former finance manager at Heathrow Terminal 5, David Mitchell, a retired architect, Chris Bell, a master builder and Dave himself, an environmental planner.

Dave describes what they had to do: “The first four years were taken up with negotiations with the planning authorities about what we’d be able to do. We had very extensive consultations about respecting the quay and the environment. At the end of 2017 it was agreed that we would have to construct a statement building that was very different to the character of the other buildings in the area but complemented them.

“We worked with CAD Architects in Truro to design a modern building with improved capacity, facilities and operational usage. This was important because we have a start and finish point right there, so our race office had to be specifically positioned within the building to optimise the view of the start and finish line.

“The next step involved concept drawings and then we did a huge amount of consultation with the local community – everyone from our neighbours to the councils and statutory organisations such as the harbour commissioners. All these meetings were done face-to-face. That led to some refinements, and we finally submitted our planning application in July 2018, getting consent just eight weeks later. A measure of our success was that there were no objections at all, and only nine planning conditions, which is about the minimum you’d ever get – it was an outstanding result.”

While all this was going on, the club had also been revisiting its development and business plans and had applied for and become a charity. This was a crucial part of the journey, particularly in terms of fundraising, and, remarkably, it was all done with the unanimous support of members at each AGM. In addition, with only nine years left on the lease, Dave and the Chair of Trustees sat down with the landlords and negotiated another 50 years, with a 50-year renewal option.

Existing club reserves were boosted with a huge grant of £91,500 from Sport England, and further significant donations were made by local individuals who offered over a third of the costs. In addition, Cockwells Boatyard, Pendennis Shipyard, Rustler Yachts and Mylor Chandlery & Rigging supplied generous in-kind contributions to the build.

By July 2020, the club had about half the money, and the building group met with the trustees and management committee to discuss next steps. Despite the covid restrictions, the result was a unanimous agreement to go ahead. “In some ways lockdown worked in our favour; to knock the old building down and construct the new one in normal times would have been difficult without reducing enjoyment by members. We were pretty confident we could raise all the money,” says Dave, “but we were concerned about price increases due to Brexit in January 2021, so rather than appointing a single company, we appointed Fox Construction Solutions as project managers, which gave us another significant saving. Because we had such an informed group, and a really good relationship with Fox, we did some forward purchasing of materials because we knew there would be price rises and shortages of supply because of Brexit – and we were proven right! By prior purchasing zinc, glass and window frames we saved a lot, because many prices went up 10% on 4 January. Starting earlier was a gamble that paid off.”

The demolition of the old clubhouse began on Monday 2 November 2020. The new building was handed over to the club on 30 April 2021 and Dave is delighted:  “We are now in the process of turning it into the home of Flushing Sailing Club. It’s going really well despite the limitations around covid. We are opening in a phased programme, but people are being respectful, and we’re now really putting our mark on the building. Our first two big events happened over the late bank holiday weekend – a championship for the Sunbeam Class and a coastal race, and it’s all happening in our centenary year!”

There’s no resting on their laurels for the team. They are now planning to gain consent for a new pontoon into the river, in order to improve disabled and general access from the water to the club.

If you'd like more information on how to get afloat at Flushing SC take a look at their website.