“Courage isn’t not being scared. It’s being really really scared and doing it anyway"...
28 May 21 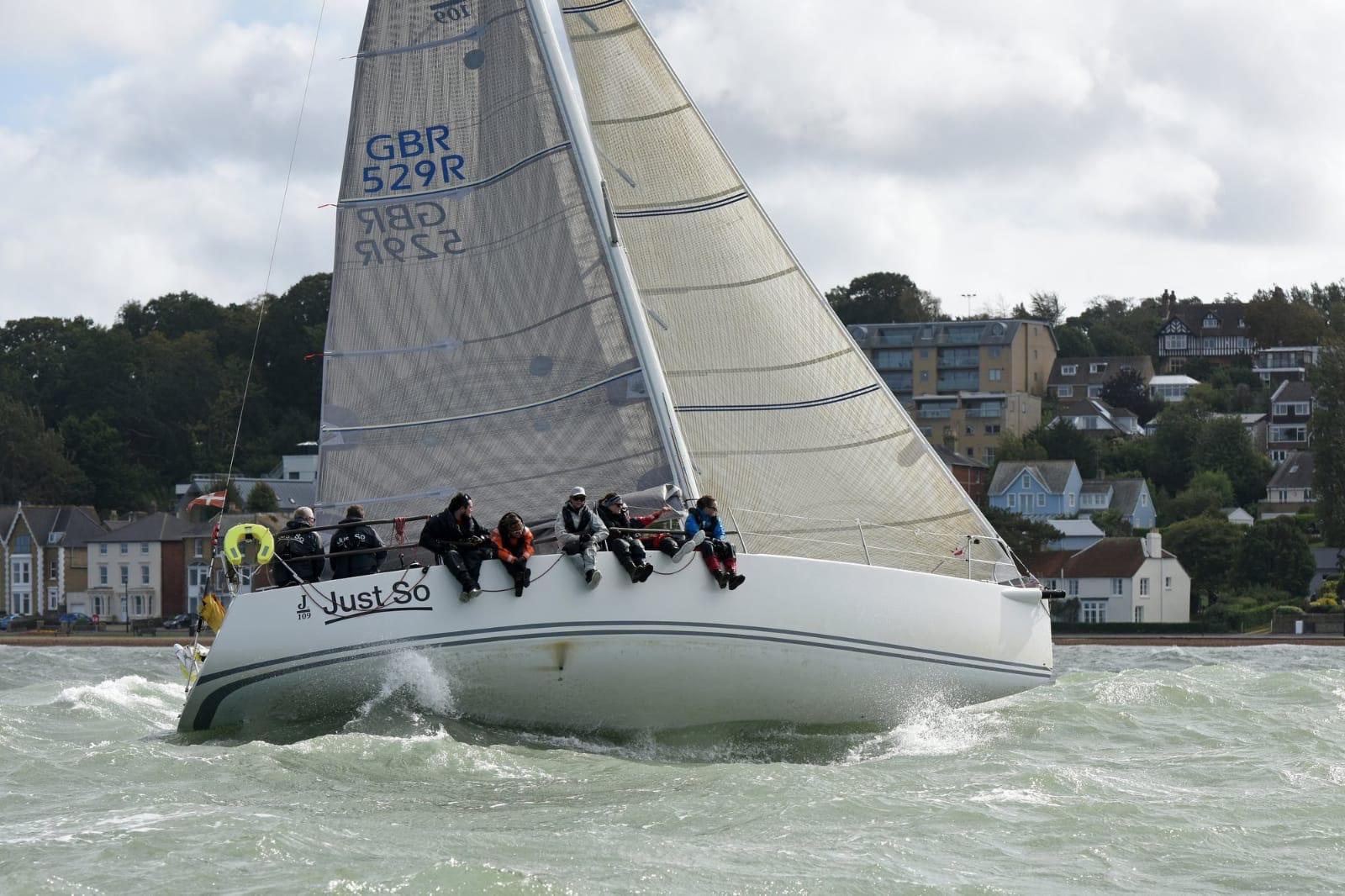 Lesley Hunt was introduced to sailing by her dad aged eight when he tried to teach her to handle a spinnaker in their back garden. She’s come a long way since then, and now enjoys sailing and racing a variety of yachts in the Solent and across the world.

Lesley is a long-standing member at Speedbird Offshore Yacht Club, Hamble, along with Silver Wing Sailing Club and credits these clubs for having been key to gaining experience and learning how to sail.

This is Lesley’s story:

Racing is my thing, plus I enjoy teaching people what I’ve learned about sailing and boats, although I’m not an official instructor.  I am a Yachtmaster Offshore, gained in 1998 so a refresher is well overdue and is booked for September, COVID-19 permitting.  I have owned two yachts in the past, a Bull 7000 in the Solent and a Beneteau First 31.7 in Sydney Harbour, both raced with reasonable success, plus four dinghies.

Currently I crew on the J/109 “Just So” and have done for the past 10 years (can’t believe its been that long!!) since I returned from Sydney and sold my beautiful Beneteau.  I also have an RS Aero but it doesn’t get a look-in very often.  “Just So” mostly does JOG (Junior Offshore Group) races, cross-channel and along the south coast, and has won her class in either or both JOG Offshore and Inshore Championships in those 10 years and more.  We also do most of the relevant Solent events such as the Warsash or Lymington Spring Series, which fit around the JOG races.

SOYC runs two yachts for members’ use, and provides the massive opportunity of sailing with many different skippers with different skills, backgrounds and interests. I have done almost all my RYA theory and practical courses through the SOYC, became a club Junior Skipper (as it was then) two years after joining, and a Senior Skipper another four years later, and I was Commodore for two years, which rapidly taught me some management skills.

This wasn’t from a standing start though.  I had crewed for my Dad since I was 5 just pulling ropes, first on an 11ft Flying 11 then a 14ft Northbridge Senior 14, and I learned to sail dinghies at university, but not particularly well, although I thought I knew everything there was to know at the time!

SWSC is a dinghy club on a gravel pit near Heathrow, and again has some boats for members use.  It has some very competitive members at national level, and many members who enjoy the companionship and the lovely setting of the clubhouse and lake.  Here I’ve learned a lot of racing skills, and the racing rules! Plus race management and rescue boat driving.

At both clubs I have made many long-time friends and done many trips overseas to other airline clubs and the fabulous big Interline Regatta in the BVIs run by The Moorings. Both clubs are now open to “ordinary” people i.e. non British Airways staff, due to separation from BA, and I very strongly recommend them.

For me, racing isn’t about beating other people or being better than anyone else. I don’t want to spoil anyone else’s day.  I take the view that there can only be one winner, and the rest of us still want to have a fun day.  Although winning does improve the day no end!  I love the adrenaline of close quarters sailing, and the skill and activity of it, either as skipper or as crew.  It’s a way of proving to myself that I’ve actually got reasonably good at this.

I’ve also found since moving into yachts that I love the team side of sailing, the idea that you need people of all different skills and sizes, and they need to work together and watch each other and encourage each other, and I absolutely love training an inexperienced person into being part of the crew, as long as they’re prepared to put in their share of the effort.  I love that when I sold my boats, my crew were all snapped up by other boats.

I’ve found that learning often isn’t immediate, and sometimes it takes quite a few goes, even over a few years, for something to make sense and to stick.  When I was 8, my Dad rigged the Flying 11 in the backyard and tried to teach me how to handle the spinnaker and gybe the pole.  No chance. I was completely flummoxed.  When I was 16, my Dad tried to teach me how to drive a manual car.  No chance.  We kangaroo hopped up and down the carpark.  A few years later, after riding motorbikes, I bought a manual car and drove it home no problem.  When I joined the BAOYC at 30, an early trip was to Portsmouth on Jambel, the Westerly Centaur.

I remember seeing the club’s senior boat, Speedbird, which at the time was a ex-racing Beneteau First 35, for the first time and being completely flummoxed again that anyone could handle such a complicated boat with so many ropes, and so many people.  I could never do that.  Six years later, and on the next Speedbird, I did.  And I bought a Bull 7000 sports boat with a humongous kite with which we charged around the Solent mostly in double figures (knots) in between broaches.

Learning takes effort.  Reading books and magazine articles, doing courses, picking other people’s brains at the bar after sailing.  Doing it, time on the water.  An acquaintance in Sydney was an Olympian.  He said he had spent an entire year sailing every single day, regardless of the weather, in addition to his day job.  Skill doesn’t just happen, and “talent” isn’t everything.  And you need to enjoy it.  Enjoy the camaraderie and the challenge.  I bet your most memorable days won’t be the sun & G&Ts, but the days when it blows a hooley, you’re soaked and windswept, and between you all you conquer it.

“Do your own looking.”  My Dad always said this when I was little and crossing a road.  I think it applies to almost everything in life.

“Courage isn’t not being scared.  It’s being really really scared and doing it anyway.”  I saw this on a card years ago.  I should have bought it but it’s engraved in my brain anyway.  I’ve since seen it in other words but this one works for me.

“Smile.”  This is from lots of people, particularly ski instructors when I’m having an off day.  If you’re enjoying the day then show it. If you’re not, then smiling has an amazing way of transferring from your mouth to your mood.