Tracey Boyne was a Senior Instructor with two tiny daughters when she bought Mylor Sailing School with a friend in 2006. At that point she had four beaten up Toppers, a double hander and one RIB, and shared a wooden hut on the quay at Mylor Yacht Harbour. A lot has happened since then.
25 May 21 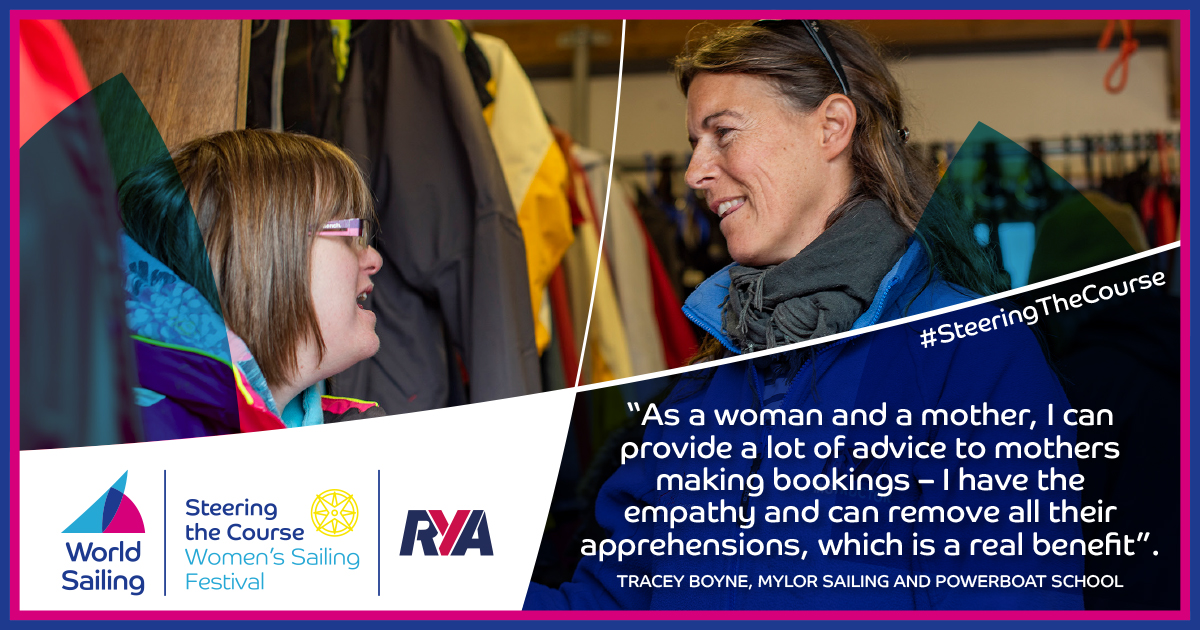 With no real aim initially, Tracey found her feet in owning a business, ploughing money back into it each year to develop it, and increasing her ambitions. Eventually, about eight years ago, she bought out her business partner: “That’s when the business really took off, when I could go with all of my ideas. I took the bull by the horns, developing Mylor Sailability, the School’s charitable arm, running more RYA courses and building the fleet - I’ve now got 13 single-handers, six double-handers, two keelboats and six powerboats. On land I have two large huts which offer accessibility including hearing loops, and ramped access, and we have a very good and comprehensive website.”

After so much growth and development, her objectives have changed again. She doesn’t want the business to get any bigger, because the high-quality service and training she offers is so important to her. Instead, she develops different projects that use what she already has: “We’ve just started the Good Day Promise project within Mylor Sailability offering free sessions on accessible boats for seriously or terminally ill people, with funding from Cornwall Community Foundation. The future is using what we’ve got, working with the community and other businesses to achieve as well-rounded a business as possible.”

Given Tracey’s high standards and ambitions, it’s not surprising that she and her projects have won a lot of awards. The first were Sportivate awards for Mylor Sailability, as the Best New Project Cornwall and Best New Project South West in 2014. Then the following year Tracey herself was awarded the RYA Sailability Volunteer of the Year: “It was nice to get a personal award,” she says, “but I don’t love the glory of it; it’s not about me, it’s about the participants. I look at the award process as getting publicity for Sailability, showing what we have to offer people with disabilities, and gaining approval for our brand, which helps when we’re applying for grants.”

More than ten county, regional and national tourism awards for Mylor Sailability have followed, in categories that include Access and Inclusivity, Sporting Experience and Learning Experience. In 2016 they achieved a joint Gold South West Tourism award with the Eden Project, Visit England awarded them Silver in 2018 and Bronze in 2019, and they were pronounced Winner of Winners in the 2019 Cornwall Tourism Awards, something Tracey is particularly proud of.

She puts her success down to drive and determination: “I think I’m tenacious and have a lot of drive to do well and make things work in the best possible way. As a woman and a mother, I can provide a lot of advice to mothers trying to book their children and themselves in – I have the empathy and can remove all their apprehensions, which is a real benefit.

“I haven’t really come across much discrimination, although the occasional older man looks past me to find the boss. I’ve built up such goodwill in the local community and get lots of local recommendations, and it is really nice to have that respect. It’s all about quality and safety – what I love doing is developing younger versions of me, and boys too, coming up through OnBoard. I love seeing them blossom and find that very rewarding.

“I am lucky enough to have a great partner who is a great believer in equality – he’s self-employed too and we juggle everything - but it’s my business. I would encourage other women that they can do it too. You can, and do, learn as you go, you can do it even with children. My girls are now 14 and 11 and I can see that they have that tenacity – they’re definitely going to be doing things and have the drive to work things out for themselves. The next generation is on the way!”

For more information on how to get out on the water in the South West visit https://www.rya.org.uk/start-boating