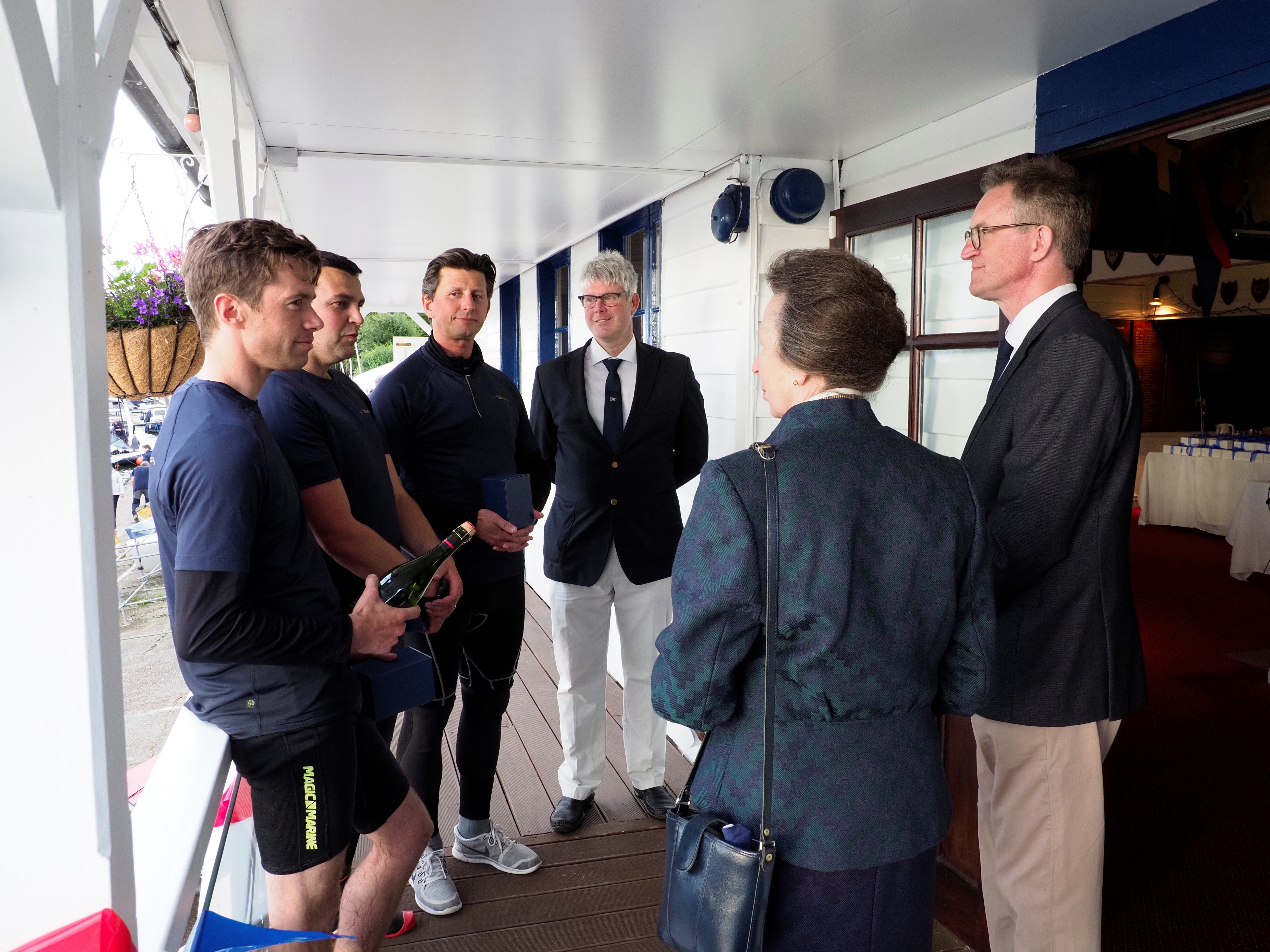 For 150 years Thames Sailing Club, based on the Thames at Surbiton, has been a fixture on the river and HRH The Princess Royal, President of the RYA, visited on 22 June to see how the club intends to keep sailing for the next 150 years.

She planted a tree to symbolically mark the launch of a major planned redevelopment of the club, which has been celebrating its 150th anniversary, making it Britain’s oldest river sailing club. To mark the visit the club laid on a series of special short races and also used the occasion to launch its new book on 150 years of Thames sailing by presenting the first copy to the Princess Royal. The Princess was also presented with a specially embroidered club polo shirt.

Thames SC has had a strong link with the Royal Family in that HRH the Prince Philip, Duke of Edinburgh, was Patron of TSC from 1959. He also wrote the foreword to the book  which goes beyond just the club to look at sailing on the whole Upper Thames. As part of her visit the author, club member Mark Laity, talked about the club’s history and showed her some of its artefacts including a compass given as a prize in Thames’ first race in March 1871.

During her visit, Her Royal Highness was also introduced to club officials before watching the short course races laid on to mark the visit. These involved a children’s race in Topper and Optimist dinghies; a stand up paddleboard (SUP) race; a Merlin Rocket dinghy race; and finally, a race for the club’s Thames A Raters, the famous Thames racers dating from 1898. The Princess started the Optimist race and later presented the prizes to the winners.

The Princess Royal’s knowledge of sailing was clear throughout and her clear interest in the club and its members made for many good conversations in a relaxed manner. She was particularly interested in the classic Thames A Raters, which date from the late 19th century. Their shallow skimming dish hulls make them perfect for river racing, especially with their tall modern rigs.
She also asked many questions of club members Jemma Horwood and Miles Palmer about the planned redevelopment of the club, with new changing rooms and boat facilities, while retaining the late Victorian ambiance that gives the club its character.

She spoke to many club members, who were delighted with the visit and her interest, one remarking, “She obviously loves her sailing and it made her really easy to talk to.”
Thames Sailing Club may be best known for its Thames A Raters but those leading the club have continually looked at ways to ensure it adapts to the times, including through enhanced training and also making itself a home for Stand Up Paddleboarders, many of whom have joined the club.

TSC’s Commodore, Matt Kyte, said: “It was a privilege to host The Princess Royal. We are proud of our links to the royal family through Prince Philip, whose passing we mourn greatly, so this visit was very special to us.

“We believe her visit was also especially timely, coming as it did so close to our 150th year, but also as we are very much looking ahead. As a charitable trust we will be offering more to the community, we will be improving the club’s facilities, and have welcomed paddleboarders as an integral part of TSC. All in all, the club is becoming a thoroughly modern watersports centre to ensure a healthy future.”