What are invasive non-native species?

A non-native species is any wild species that is not normally resident and not a regular visitor to Great Britain. Some non-native species are completely harmless but others, known as invasive species, have the ability to cause damage to the environment, the economy, our health and the way we live.

How did they get here?

Invasive non-native species (INNS) can be transported to Great Britain in a number of different ways including by shipping vessels, aquaculture industries, accidental/intentional release and even by being swept across an ocean on currents. They can also be transported from place to place by hitching a ride on boat hulls, anchors and propellers, or being carried in ballast and bilge water.

The spread of invasive species is becoming a major issue in both marine and inland waters around the world because they compete with native plants and wildlife and can cause major changes to entire ecosystems.

As well as the devastating environmental impacts, non-native species can spread disease, restrict navigation, block waterways, clog up propellers and add significantly to the management costs of our waterways. Recreational facilities can also suffer as a result of these invasive species. 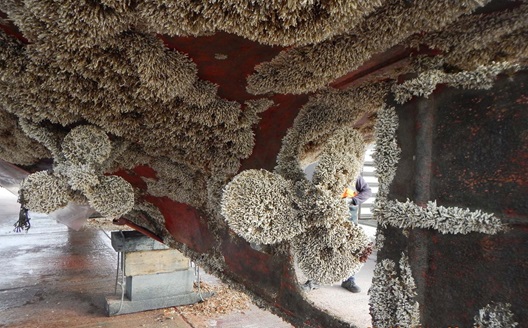 How do you identify them?

It's not always easy to identify these species, but there are some guides available to help:

For more information on how non-native species can affect biodiversity, human health and the economy, read this informative article by the European Environment Agency.

Further information on non-native invasive species can be found on the GB Non Native Species Secretariat website. Advice on boating best practice can be found on The Green Blue website.

What can you do?

As recreational boaters, there are a number of actions that we can take to minimise the risk of introducing or spreading these invasive non-native species (INNS) around Great Britain. The presence of the "killer shrimp" in some inland reservoirs highlights the potential issues that non-native species can cause for recreational boaters. It has also demonstrated how successful management techniques and good working relationships can help ensure that recreational boating activity can continue whilst limiting the further spread of the species.

The RYA has been working closely with the GB Non Native Species Secretariat (NNSS), the Environment Agency, Natural England, Natural Resources Wales, Marine Scotland and Invasive Species Ireland to develop guidance for recreational boaters on minimising the spread of non-native species. This guidance provides clear advice on simple steps that we can all take to limit the spread of these species by recreational boaters. It also contains advice on what to do if you find that a non-native invasive species has appeared in your local water.

RYA biosecurity guidance for RIBs, sports boats and outboard engines is available as a download and there is further advice entitled "Biosecurity for boat and kayak users" from the GB NNSS.

“Check, Clean, Dry” is the best way to protect both your stretch of water and others around the country from INNS.

Check boats, equipment and clothing for living plants and animals. Pay particular attention to areas that are damp or hard to inspect.
Clean and wash all equipment, thoroughly with freshwater and anti-foul boats annually. Remove visible fouling and put in the bin, not back in the water.
Dry responsibly! When recovering a boat, trailer, dinghy, Personal Water Craft or RIB, drain water from every part and all equipment that can hold water, including any water that collects in bilges, before leaving the site. Clothing and equipment should be thoroughly dried for as long as possible before it is used elsewhere.

You may have taken your boat to a club or site already actively dealing with these problems and may therefore be well versed in the “Check, Clean, Dry” process. If you haven't, or even if you rarely take your boat away from your club, it is good advice to have all boats, checked, cleaned and dried before getting back on the water.

The risk of spreading invasive species can be limited by following some simple guidance:

Avoid sailing or motoring through water plants and weed if possible. This can chop up plants and can spread them further. If caught up on the hull or propeller, invasive alien species can be transferred to another area.
If the boat is on the water but not in use and stationary for a period of time, if possible, raise propellers out of the water to minimize the risk of species entering the engine. Use your boat regularly to prevent biofouling of the hull and engine.
If an anchor has been used, wash off both the anchor and chain before stowing. 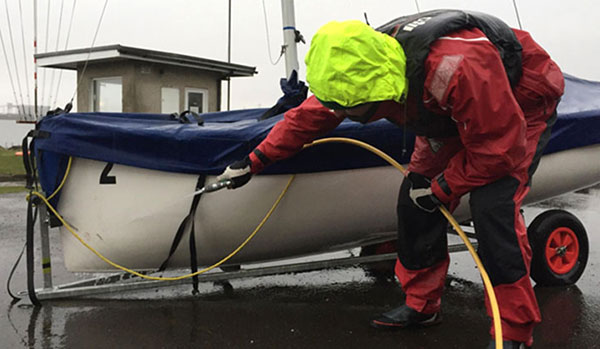 What is the RYA doing about it?
The GB Non-native Species Secretariat has responsibility for helping to coordinate the approach to invasive non-native species in Great Britain. They are responsible to a Programme Board which represents the relevant governments and agencies of England, Scotland and Wales.

Our work on INNS is underpinned by a strategic framework within which the actions of government departments, their related bodies and key stakeholders are coordinated. The RYA has contributed to the implementation of the strategy through our work in raising awareness of biosecurity with our members and through the work of The Green Blue.

The new EU Regulation on Invasive Alien Species came into force on 1st January 2015. The legislation seeks to address the problem of IAS across Europe through prevention, early warning, rapid response, and management.

A list of IAS of Union concern, drawn up with Member States using risk assessments and scientific evidence, came into force in August 2016, and has had subsequent updates. Member States are required to address these species by preventing them from being introduced, kept, sold, transported, reproduced or released. Member States will also have to put in place appropriate measures to tackle new invasions or established populations of the listed species. The regulation also establishes a surveillance system for early detection and measures for rapid eradication.

The RYA is working closely with the European Commission and the UK Government to minimise the impact that this regulation has on recreational boaters and ensure that any restrictions are proportionate, evidence based and enforceable.

The RYA was commissioned by the Council of Europe to develop a European Code of Practice on Recreational Boating and Invasive Alien Species to ensure that we are playing our part to stop the spread across Europe. It was adopted by the Bern Convention in November 2016.