Guidance on how to operate a gate start

The gate start was developed to improve race management for fleets of over 100 boats. It is now used by smaller fleets and can be a very fair way of starting races. The basic principle of a gate start is that a pathfinder starts at a fixed mark on port tack and all other boats cross behind her on starboard tack. The pathfinder is usually chosen from one of the leading boats in the fleet.

Conditions for a gate start

A fair gate start needs a wind which is steady in direction and strength. The sea conditions must be such that the pathfinder can sail a true course without having to play the waves for safety. Any tidal stream should be constant in rate and direction over the whole line.

This acts as a moving starting mark at the starboard end of the line. It should be large enough for an Assistant RO, in addition to her normal crew. The gate launch should be;

A guard launch, flying flag U

The role of the guard boat is to protect the pathfinder as she sails along her port tack to open the start line. It should be comparable to the gate launch but only needs to be large enough for the normal crew. It should be a soft RIB in case of collisions.

The Sailing Instructions should include the following:

Further to the Sailing Instructions information, competitors new to Gate Starts appreciate a separate instruction possibly placed on the Official Notice Board going through the process. 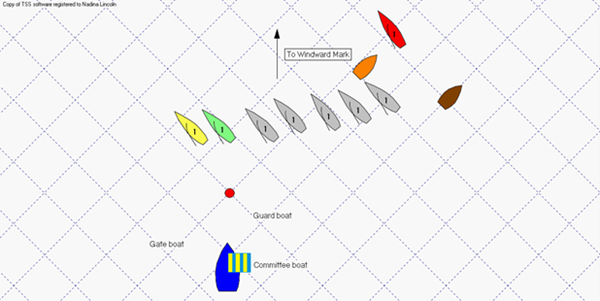 A gate start should allow all competitors of all standards an equal start, but its smooth operation depends on the skills of the race committee, the pathfinder and the gate and guard launches.

A gate start may be subject to a general recall if the race officer considers the start is unfair, or when the pathfinder, gate or guard launch is interfered with by boats in such a way as to impede the operation of the gate.

The usual cause of a general recall is a bend in the wind or a substantial shift which favours one end of the line.

The pathfinder may cause problems with the start either by trying to start early or by bearing away into the waiting fleet to gain an unfair advantage. If the pathfinder is suspected of doing this, she should be warned and given one more chance and then if it happens again protested under Rule 2 or 69.

The recommended time the start line is open is the number of boats x the time to travel one boat length. Time and Speed Charts in the Racing Rules of Sailing, provide the time it takes a boat to travel one length for different wind speeds. The average speed for most dinghies is 3-4 knots on the beat. For the faster dinghies their overall beam also needs to be considered, which includes the crew on a trapeze wire or outrigger. This is calculated using the Fiddle Factor. For most starts the fiddle factor is 1. However for catamarans or boats with wide beam this may be 1.25 or 1.5.

This is then rounded up to nearest minute, i.e. 3 minutes.

This useful video made for the RS200 class, a frequent user of gate starts, will assist you.