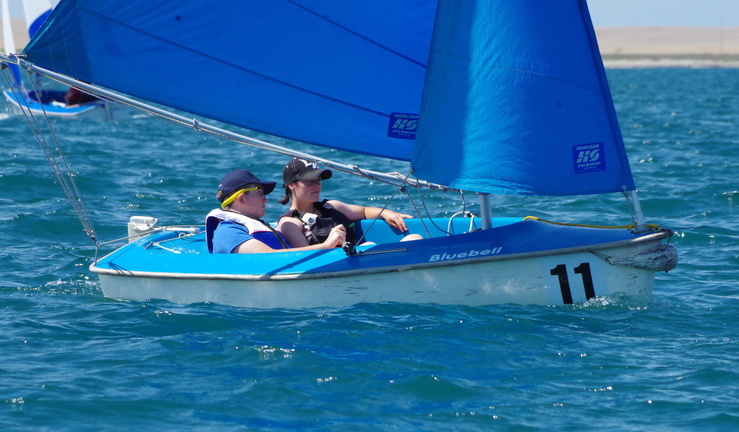 Joe, diagnosed with a brain tumour when he was young, competes at his first ever sailing event

Since doing it week in week out I've built up confidence in my ability to sail, and have enjoyed talking to all the different volunteers I see on the days I go. I have people at the club I enjoy spending time with

“Sailing is something I feel positive about myself.”

Joe Cook is mulling over why he loves sailing. He’s sat in an empty marquee, animated after his first ever racing experience. If he was feeling any fatigue from sailing in the waves and the mental demands of competition, you would never know it.

“I get a buzz every time I go on the water and I think it's the sense it's something I can do. It gives me a lift.”

Joe, from Uxbridge in Middlesex, was almost 13 when he was diagnosed with a brain tumour. He underwent treatment at Great Ormond Street Hospital and latterly UCLH in London, and spent almost nine months in hospital during 2006.

His treatment had an impact on his mobility and language. Sailing helped him discover what he is capable of.

“Since doing it week in week out I've built up confidence in my ability to sail, and have enjoyed talking to all the different volunteers I see on the days I go. I have people at the club I enjoy spending time with.”

Joe had previously tried sailing before his diagnosis. But it was after his brother took him along to Hillingdon Outdoor Activities Centre’s (HOAC) annual Special Needs Watersports Day near his home that Joe got a real taste for being on the water.

Kayaking grabbed his interest initially. But after losing countless pairs of glasses in the HOAC lake, he figured you get less wet in a boat and opted to stick with sailing! That was five years ago and he hasn’t looked back. When the chance came to try racing this summer, he leapt at it.

“It was something different,” Joe continues. “It was that little bit further than just sailing on a Saturday. It was going that extra mile that brings it all into context. I've really enjoyed it.”

Keen to integrate racing into HOAC’s Sailability activities, Senior Instructor, Abby Pretlove, decided to use the RYA Multiclass Regatta as a bit of a fact-finding mission. Joe was the only HOAC sailor that attended, and, although he typically sails a Challenger, the pair teamed up in a double-handed Hansa 303 at the Multiclass.

Every swell and every wave was then a learning experience for them both.

As Abby explains: “I want to integrate some racing into our club to help people progress their sailing a bit more. My own experience in racing is quite low so I decided to jump in at the deep end and say 'Ok we're going to the Multiclass!' Only after I'd said that I realised all the planning that goes in with it!

Not that Abby hopes it will be the first and only time HOAC get involved.

She admits she learned so much about racing that weekend and will spend time getting up-to-speed with everything running racing entails.

Joe is already asking if he can race again. It’s fair to say he has got the bug.

“It's just getting to that next stepping stone, isn't it?” Joe concludes. “Pushing on with it, putting the effort it and taking hold of something that you're doing to get to the next level. I felt much more confident on the water than I did the day before and the day before that. It's the opportunity and achieving it. That's how I feel, like I've achieved something.”

With over 200 Sailability venues, there is somewhere on the water near you. Finding the best fit for your values, needs and budget is key to your enjoymebnt.

Before your first visit, find out what support you can expect, plan what you need to bring and think about the support you will need

Everyone's different, so contact us if you have questions or want to find out more about how boating can be made to work for you

Looking for the next challenge - the only limit is your imagination. There is a world of opportunity to develop your skills, build confidence and nurture your passion.

A level playing field. Everyone can go sailing. Rule the waves with activities for young people, adults and groups at your pace, adapted to your abilities

Sailing is open to everyone. Regardless of age or ability, it’s a level playing field out on the water and the opportunities to get involved are ever evolving. Find out about some of the boats involved