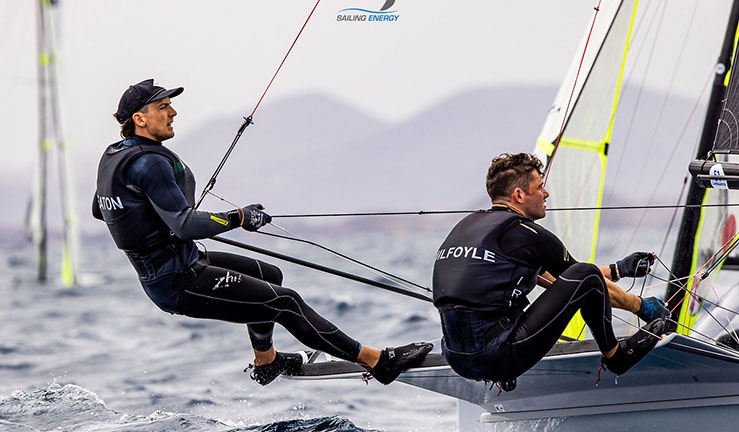 However, these are just some of many achievements that Seaton secured in sailing. He began sailing when he was five, taking part in a £1 Saturday school at Carrickfergus Sailing Club. Just another five years later he was crowned Irish National Champion in the Mirror Dinghy and achieved 7th at the World Championships in South Africa.

Moving to the Topper Class in his grey boat, Ryan worked his way up the ranks and at aged 15, he secured the title of Irish National Champion.

From here he moved to the Laser radial class as part of the RYA Northern Ireland Youth Squad, finishing 5th at the Laser Radial Worlds in California and competing in the Laser Full Rig Worlds.

For Seaton, sailing is a way of life. He says: “I guess you could say I was born into it. Dad got me into sailing as soon as I could crawl, going on trips with him around Scotland and Ireland. Family holidays were always on boats, my family all sailed.

“I quickly fell in love with the water and the freedom it gave me. I liked to jump in the water after sailing, the cheesy chips, steering the boat and of course doing my best to beat other boats.”

There was a turning point, though, when Seaton turned from sailing for fun to realising he had the potential to compete on an international stage.

He explains: “Bill O’Hara (then RYANI High Performance Manager) contacted my Dad when I was sailing the Laser Radial, I had just won the Nationals and finished 5th at the worlds in California. He told my dad that I had the potential to become a world champion and that he advised my parents to support me if they could.

“Money was tight and my dad worked very hard to help me as well as my mum, driving me all around the country to ensure I could sail against the best. I still remember that phone call like it was yesterday!”

While Seaton made it look easy at times, he says it wasn’t: “I worked hard on my sailing and was lucky enough to get some results enabling me to get support Notably from the Mary Peters Trust and Sport NI funding. Without this, I would never have been able to progress into international sailing. I missed doing euros and worlds in Toppers as it was so expensive, the opportunity to do it in lasers was massive for me and my family.”

Seaton explains: “When I switched to sail 49er, I was just in the right place at the right time. I have amazing memories of sailing with Matt and being able to show off my skills as a helm in the correct class for me. The Olympics in London 2012 was my dream come true, having my mum and dad and brothers at my first ever 49er regatta was special. I was so lucky it was so close to home, they could be there to enjoy it and support me.”

While it is the end of an era for Seaton, he says he has nothing but good memories: “I have committed my whole life to sailing, it has been so good to me. I met my wife through the sport and many good international friends and people at home.”

Now with a little baby girl Nona at home, he has plenty to keep himself occupied. He has one piece of advice for anyone who is thinking of taking up sailing, or at the start of their journey. “If you love something, go for it. Dream big and put all your energy in. It has to be fun and you need to do it for yourself and no one else. Work hard and have fun,” he says.

RYA Northern Ireland’s Performance Manager, Andrew Baker, commented: “Ryan has always been a standout athlete, even during youth classes. I have my own memories of racing against him and wondering how he could just keep hiking so long when my own legs were on fire.

“Despite only working with Ryan in his final year,  it is clear to see how RYA Northern Ireland has helps to support and guide him during the crucial times throughout his career. With two Olympic appearances under his belt it proves that the system works and that gives encouragment for our future sailors.

“On behalf of everyone at RYA Northern Ireland, I wish Ryan all the luck in his future plans. We will keep up to date and I am sure he will make a few guest appearances to help us grow our current young athletes.”